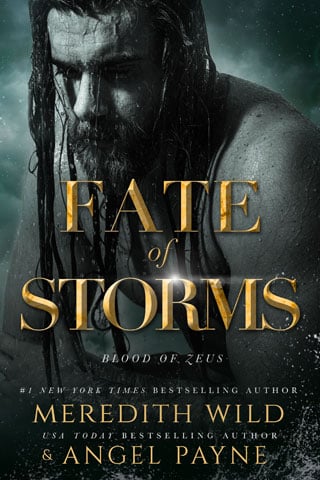 Fate of Storms
A stolen destiny. An impossible quest.

Kara Valari has broken one of the underworld’s highest laws and is serving the ultimate sentence. But nothing—not even the impossible quest of breaching the boundaries of hell and facing off with Hades himself—will keep Maximus Kane from rescuing her. The journey will demand all of Maximus’s courage…and help from an unlikely guide. Driven by love, he sets off into a dark realm he only knows from the tattered pages of Dante’s Comedy.

In hell’s bleak world, every part of Kara’s soul is subjected to Hades’s morbid fascination and merciless assault. Giving in to his demands means sharing the intimate details of why she dared to disobey him—a love for Maximus that, even now, burns on in her heart. Just when Kara resolves herself to an eternity of her nightmare, she discovers a glimmer of hope…a way to glimpse her beloved. Could her visions of Maximus unite them once more, or are they just another twisted punishment for her in a kingdom designed for agony?

In those fleeting moments of light and passion, Kara rekindles her fight to survive. Darkness may still separate her from Maximus, but they’re connected by fate. But can their love survive this storm?